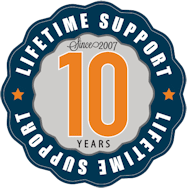 This article explains, in simple terms, what frequencies are being used by cellular carriers and devices in the United States, Canada, Mexico, most of Central America, and western South America.

How to get better cell signal

Cell signal boosters provide cellular reception where today’s networks can’t reach: Inside buildings made from concrete, metal, and low-e glass; rural and remote locations; low-lying areas and other places where signal is blocked by natural and man-made obstacles.

The cellular spectrum is divided up into different frequency bands. National governments usually control the allocation of bands and how they are used. In the United States, the Federal Communication Commission (FCC) allocates frequency bands to cellular carriers; the carriers obtain licenses for exclusive use of these bands in specific regions of the country.

In the beginning: Cellular and PCS bands

In the early days of cellular phones, 800 MHz band 5 was used for simple voice transmission. There are only two channels in the 800 MHz band: A and B.

As cell phone usage grew, more bandwidth was needed to support the increasing user load, so band 2 1900 MHz was licensed to the carriers and named the Personal Communications Service (PCS). 1900 MHz has six channels, A through F. (Band 25 PCS was added later with seven channels, A through G.)

The rise of cellular data: AWS and SMH bands 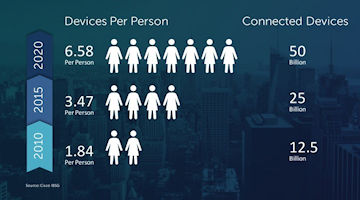 The introduction of the smartphone in 2008 changed the cellular landscape: Cellular phones went from low-bandwidth voice and text devices to high-bandwidth users of Internet data. Web browsing, email, social media, and streaming audio and video began to play a major role in mobile. User loads on cell towers soared. Smartphones have since been joined by 4G tablets, laptops, and smart watches. As the chart to the rightabove shows, the number of cellular devices per person has been increasing exponentially.

Advanced Wireless Services (AWS) and Long Term Evolution (LTE) frequencies were launched in 2006 and 2010, respectively, to support the massive amounts of data that cellular carriers were moving through their networks. Later, 4G LTE technologies increased data speeds over ten times those of earlier 3G networks.

The future is upon us: 5G, IoT, autonomous vehicles, and more

5G cellular networks are just around the corner. A wave of continually-connected devices and appliances—the Internet of Things (IoT)—has already started to crest, and self-driving vehicles will demand instantaneous data for guidance and control. These new advances will require faster data in more locations.

New cellular networks are already starting to operate in the 600, 2300, 2600, 3600, and even the 5200 MHz frequency ranges. These will provide cellular connectivity to more devices with higher bandwidth requirements.