What do the signal bars mean?

Signal bars are often not an accurate measurement of the strength of the signal your cell phone is receiving. While they do indicate the strength and quality of your reception, there’s no industry standard for this much signal equals this many bars—each cell phone manufacturer comes up with their own calculation. Because there are many different methods of computing bars, two different brands of phones on the same cellular network, placed next to each other, might display different numbers of bars.

Take a look at the notification bar at the top of this screen on a Samsung smartphone: The signal meter (circled in red) indicates 4 bars. Most people would say that’s very good signal. But is it? 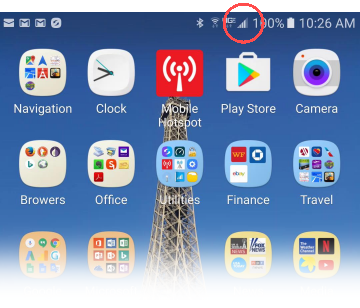 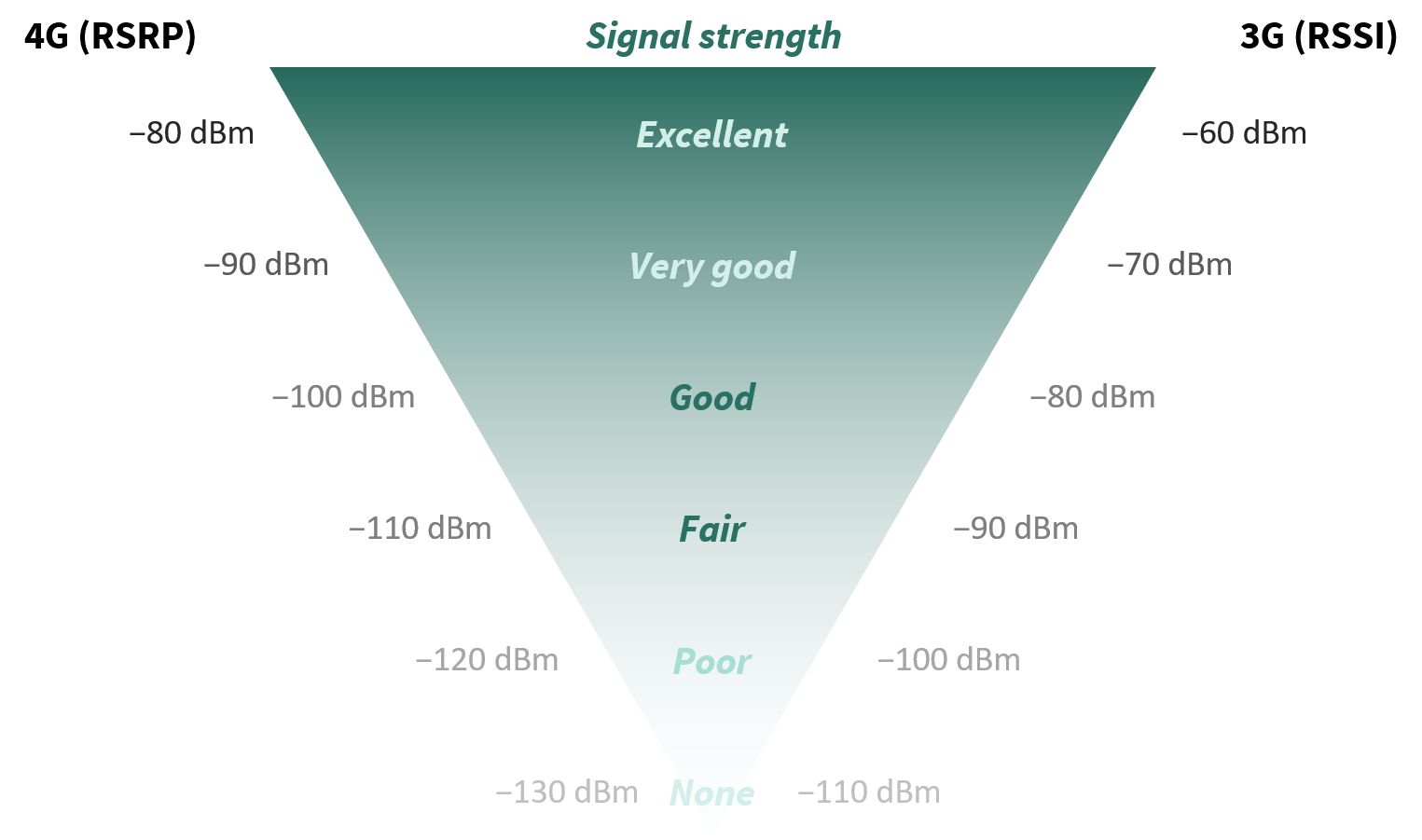 In most instances, if you’re receiving less than −120 dBm RSRP or −100 dBm RSSI, you’ll be unable to make phone calls, send or receive text messages, or use Internet data. 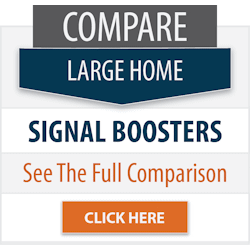 How do I determine my cell signal strength?

Finding the signal strength received by your phone depends on the manufacturer, the phone model, and which cellular network you’re using.

If you have an Android smartphone, you can find your received signal strength in the phone’s settings under Signal Strength.

Exactly how to get this varies between phone models, but it’s usually somewhere in Settings > About Phone or Settings > System > About Phone. Some possible locations include:

Here are some examples from Android phones in our office. (Notice that the RSRP readings in dBm are all nearly identical, but the number of bars varies.) 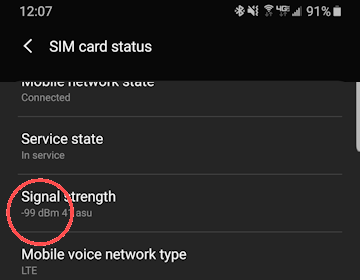 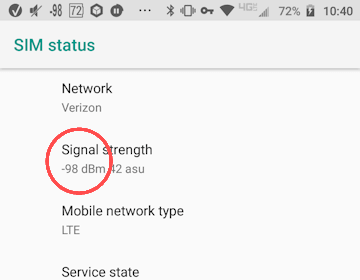 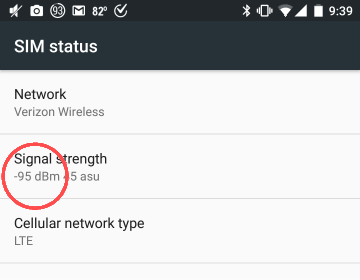 There are also many Android apps in the Google Play store that will display your phone’s signal strength. One that we recommend is Network Cell Info Lite, which shows your signal on its dashboard-like Guage screen: 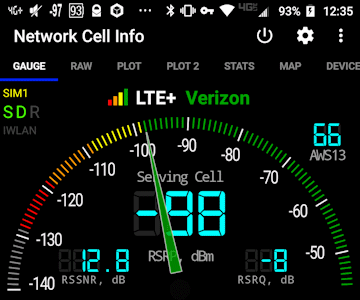 Links to third-party software are provided “as is,” without warranty of any kind, either expressed or implied, and such software is to be used at your own risk. Powerful Signal will not be liable for any damages that you may suffer in connection with downloading, installing, or using such software.

Getting the cell signal strength reading on an iPhone may be possible, if your carrier and the chipset in your phone supports it.

This will put your iPhone into Field Test Mode. You’ll see one of the three screens below: 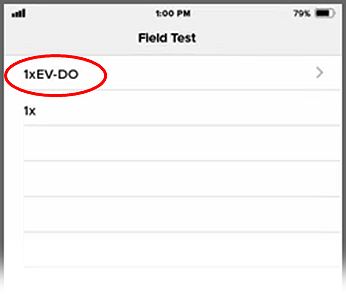 On the next screen, look for the reading next to Rx AGC0. 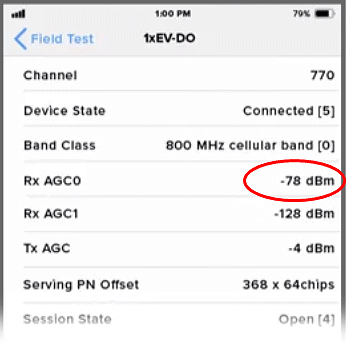 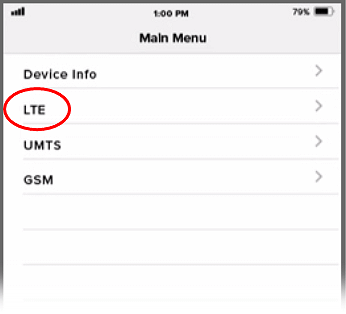 On the next screen, tap Serving Cell Meas. 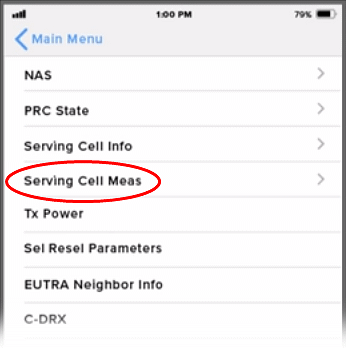 On the next screen, look for the reading next to rsrp0. 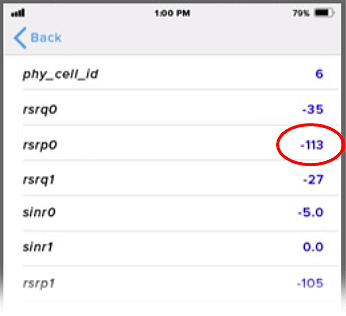 Unfortunately this combination of chipset and carrier does not allow you to get a cell signal reading in dBm. You’ll have to take a signal reading with another iPhone, an Android phone, or a signal meter. 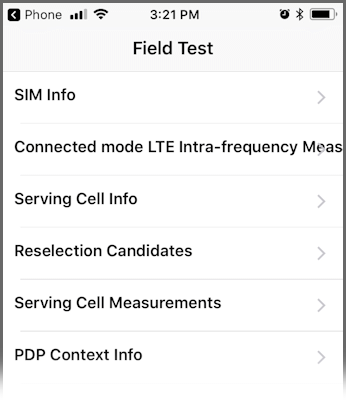 Your cell signal will fluctuate

The signal strength you receive from the cell tower will constantly increase and decrease, even if you’re not moving. Standing still, you’ll commonly see fluctuations of ±5 dB. This is primarily due to two factors:

Because of shifting usage loads, signal strength from a cell tower to your phone is constantly changing. If your cell signal is −110 dBm RSRP, you can probably make a call without any problems. If your −110 dBm signal falls to −120 dBm RSRP because of the load on the tower, you might drop a call but be able to redial and reconnect in a few seconds.

It’s possible to be close to a cell tower but still have a weak cell signal. Many building materials—including concrete, metal, low-e glass, wood, and plaster—will reduce or block cellular frequencies from entering the building and reaching your phone. Stucco with wire mesh, metal roofs, large logs, and vapor barriers in attics also impede cell signals.

Even if you’re outdoors, dense forest, bluffs, and hills will reduce or block cell signals. Low areas around lakes, rivers, and gullies can have problems—there is signal, but it’s passing way over your head.

Dense urban areas with tall buildings have a different set of problems: Sometimes the top floors of buildings, 40 to 50 stories up, can’t get a good cell signal because towers are broadcasting at a lower elevation.

In all of these situations, a cell phone signal booster for home, office, or vehicle can solve your reception problems.

I can see the tower, but I have no signal

Sometimes you can see your carrier’s tower down the road or off in the distance, but you still have weak cell signal. Just because you can see the tower does not mean that the tower is broadcasting in your direction. This type of issue is more common along remote highways where cell signal is mostly directed toward the highway and little or none behind the tower.

Directional sector antennas used on cell towers broadcast signal only in certain directions. Just because you can see the tower does not mean that it sees you.

It’s also possible that the tower nearest you is operating for a different carrier than the one you’re using.

Different cellular frequencies can travel different distances. Cellular transmissions in the 700 MHz (SMH) and 800 MHz frequency (CLR) ranges can travel more than twice the distance of transmissions at 1900 MHz (PCS) and 1700/2100 MHz (AWS).

700 and 800 MHz transmissions can also penetrate building materials better than 1900 and 1700/2100 MHz transmissions. You might be able to get 4G cellular service at 700 MHz inside a large, downtown building, but not get any PCS or AWS coverage (which have faster data speeds).

If you can find out which frequencies your carrier uses in your area, you might be able to discover the reason behind any reception issues you’re having.

…or contact us online. Our experts can help you determine why your cell phone signal may not be as strong as you need and help you find a solution to your problem.