What Is 5G?
Are Cell Phone Boosters 5G‑ready?

5G is the fifth generation of cellular communications technologies. It includes upgrades to cellular network software, the installation of new antennas and other hardware, and the introduction of new cellular frequencies. 5G dramatically improves the speed of cellular data and increases the number of cellular devices that can connect to a single cell.

5G networks will continue to use current low-band 4G LTE cellular frequencies (600–2700 MHz). Lower-band frequencies travel longer distances and will continue to be used for widespread coverage across North America, especially in rural and outlying suburban areas. 5G improvements will increase the data speeds on these low-band networks by 20 to 40 percent above what 4G could provide.

Current low-band cellular frequencies can travel long distances, with the lowest frequencies having the longest ranges. The maximum  distances of newer 5G frequencies will have shorter ranges than all of these. (Click to enlarge.)

Cellular carriers are also expanding coverage and increasing data speeds by adding mid-band or “sub-6” frequencies (2700–6000 MHz) and high-band or “millimeter wave” (mmWave) frequencies (24–48 GHz). These higher frequencies provide much faster data rates—as much as 80 times the speed of 4G networks—but higher frequencies don’t travel as far and don’t penetrate building walls, glass, and car roofs as easily. These limitations mean that mid-band and high-band 5G are going to be concentrated in urban and dense suburban locations, where people live, work, and travel very close to cellular antennas.

5G phones have antennas and software that can receive and transmit on low-band, mid-band, and high-band 5G networks. If you don’t plan on getting a 5G-capable phone anytime soon, you’ll still be able to use existing 4G networks.

4G frequencies will continue to be used, they’ll just get faster with 5G technologies. Gaps in 4G and 5G coverage will continue to exist, so some homes and businesses will still need the improved coverage cell signal boosters provide.

Today’s 4G boosters work on most low-band 5G networks. The 4G booster you have now—or the one you’re considering buying—will continue to work indefinitely on existing LTE frequencies.

Before you purchase a cellular booster for your home or business, make sure that your carrier is using bands of frequency in your area that the booster can receive and amplify.

The FCC has not yet issued blanket approval for cellular boosters to operate on some 4G/5G cellular bands, including:

(See here for a complete list of cellular frequencies.)

While the FCC hasn’t yet issued blanket approval for some frequencies, booster solutions are beginning to become available and may be operated with explicit permission from your carrier.

Is 5G harmful to people? 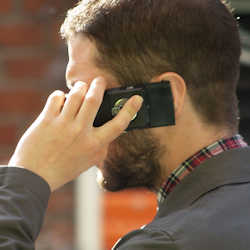 The U.S. Centers for Disease Control and Prevention

, and other public agencies have been studying the effects of cellular phone use since the mid-1990s. While research is still ongoing, the WHO has stated:

A large number of studies have been performed [since the 1990s] to assess whether mobile phones pose a potential health risk. To date, no adverse health effects have been established as being caused by mobile phone use. source

Cellular phones are radio-frequency transmitters. The low-energy electromagnetic frequencies they use—600 MHz to 49 GHz—are non-ionizing. Unlike x-rays and gamma rays, non-ionizing radiation

doesn’t have enough energy to strip electrons from atoms and cause cellular damage that leads to cancers and other health problems.

Non-ionizing radiation cannot damage human tissue at the molecular level like ionizing radiation can, but it can heat substances. The wattage on cell phones and cell boosters is so low, however, that the amount of electromagnetic heat they generate is barely perceptible. A microwave oven cooks food at around 2450 MHz with 1,100 watts of power; cell phones and WiFi routers operate near that same frequency but with 1/1000th the power of a microwave oven.